Hello Guys, I'm Hanzo Kimura, The Developer of Valkyrie Stories: Escallion Rising
First of all, I would like to thank my fellow team members for joining and loving how great this idea is. I know we can all work this out.
I apologize for my "not so very good grammars", I don't want to repeat and repeat that. It's obvious that English is not my First Language

Note: All Information was written by me, It will be changed as me and the Writing Department Discuss things up
The Terms, Namings and Every Detail might change from time to time as we developed the game further

(More Infos, Character Images, Concepts will be released in the future)
★ Vandeleir Clan ★
Vance Vandeleir
Gender: Male
Role: Main Character
Age: 20 Years old
Info: 2nd Son of Former Lord Venjamin Vandeleir, Looking for justice to each and everyone in his family's death. He founds himself lying in Mt. Escallion with his brother who is already dead. A Young man with Furious Anger to Kaiser Cronus, and keeping all emotions about his grief. Once a happy child that became a Serious Guy. He and his brother Veinhart planned to make a Secret Small Villa and Recruited Talented people to Free their nation from Cronus.

Veinhart Vandeleir
Gender: Male
Role: Main Character
Age: 22 Years old
Info: 1st Son of Former Lord Venjamin Vandeleir, Died at Mt. Escallion. Protected his brother through out his whole life as what he promised to their mother. His Mother Valeria Vandeleir, Her Girlfriend Elena Riviera, and so as his bestfriend Cain Camus died right before his eyes. He doesn't fear Death after that. and will risk all his life to protect his brother.

Valeria Vandeleir (Deceased)
Gender: Female
Role: Mother of Vance and Vein
Age: 45 Years old
Info: A Princess of Aragon City at LeLuxima Continent, Became Husband of Venjamin Vandeleir from the Yz-Arc Continent. Was assassinated from an Unknown Man. She was found bleeding to death by her first son Vein in her room.

Venjamin Vandeleir (Deceased)
Gender: Male
Role: Father of Vance and Vein
Age: 48 Years old
Info: Son of Veinance Vandeleir, Became the 2nd Lord of Vanir Era at his age 25, He was signing a Peace Contract between Luxima and Yz-Arc as one of the High Orders Objected. Valeria Died and Aragons got mad to Venjamin and declared war instead. 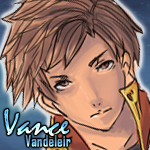 Similar topics
» Dark Water Rising by Mariana Hale
» Can You Name This Game Character
» My Fantage Character - What do you think?
» How do you make your fantage character, your avatar?
» Imperium rising ooc